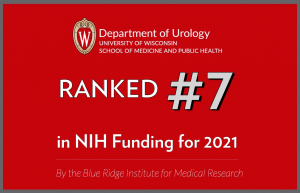 The Blue Ridge Institute for Medical Research (BRIMR) has publicly released its NIH Funding to U.S. Medical Schools rankings for the 2021 federal fiscal year. Our department is ranked #7 in the nation for urology departments. UW Department of Urology investigators received a total of $2.9 million in NIH research funding in 2021.

Department Vice Chair David Jarrard, MD, sees this year’s ranking as “evidence of the department’s continued strength and commitment to excellence in the pursuit of improved care for our patients.”

We could not have achieved this milestone without everyone’s support, as well as the successful program leadership of Dr. Will Ricke. Current funded investigators as part of this survey are Doctors Will Ricke, Kris Penniston, Teresa Liu, and Petra Popovics. Other investigators are close to receiving NIH funding as well. This was a banner year for our department’s scientific programs and the future is even brighter.

Congratulations to these investigators and their teams!

The David T. Uehling Chair in Urology
Department of Urology