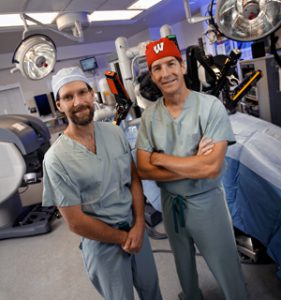 During the first year of  the urology residency program, the emphasis is on general surgery. In addition to general surgery, rotations may include trauma/critical care, GI surgery, surgical oncology, vascular, and cardiothoracic. You will also rotate through the organ transplantation service. You will spend two months on the UW urology benign service in the first half of your PG1 year and two months on the UW urology oncology service during the latter half of the year.

The second year is spent on the UW urology service, the pediatric urology service, and the VA service. The UW urology service consists of rotations on both the benign disease/conditions service and the UW Consult service. Rotations consist of time spent in Urology clinic, the operating room, and on the inpatient service. The surgical emphasis is on endoscopic and open surgical skills that progress with a graded level of responsibility. You will rotate every two months with emphasis on pediatrics (four months), benign urologic disease and conditions and consults (two months each), and VA urology (four months).

During your fourth year, you will spend four months (split into two two-month blocks) on the combined Meriter/UW Health TAC rotation, and four months at the VA Hospital, which adjoins UW Hospital. While at the VA Hospital, you are given primary responsibility for patient management and care. The remaining four months are divided into two two-month elective rotations, allowing you to focus your education on clinical areas of interest.

During your fifth year, the emphasis is on major operative urologic cases as the Chief Resident. The year, again, is divided into two-month rotations, alternating between UW Hospital, oncology and benign rotations and UW Chief of Service rotations.

Clinical experiences will give you a broad exposure to general urology, urologic oncology, stone disease, infertility, female urology, neurourology, and pediatric urology. You will benefit from multi-disciplinary clinics in each specialty, a philosophy that is strongly embraced at UW Hospital and Clinics. It will also include a high volume of experience in office-based procedures like cystoscopy with stent removals and placements, urodynamics, prostate biopsy, vasectomy, and many more.

Please direct any questions regarding application process to: